Skip to content
Looking at people in the street you will … be amazed at how many people show considerable variation from a neutral body. By observing them and analysing body part by body part, you can reconstruct their body with yours and feel what it is like to live in that state.
~ John Martin

I breathed the air of so many places without keeping a sample of any. In the end, everyone is aware of this: nobody keeps any of what he has, and life is only a borrowing of bones.

My friend David recently attended a Sunday evening church service at a predominantly African-American church on Chicago’s South Side. Hand waving, dancing, singing were only a sampling of the forms that bodily and vocal participation took there.

That preacher inspired one congregant to activate her electric wheelchair and whiz up and down the church aisles as she warmed up to the night’s message. Nothing stopped this worshipper from using everything she had. Who knows what others experienced as they witnessed this unusual expression of fervor? 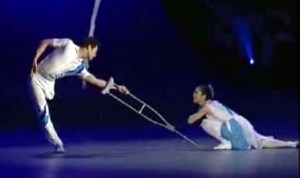 In their duet She Without Arm, He Without Leg: Hand in Hand, Chinese performers Ma Li and Zhai Xiaowei make moving use of their unique body capabilities. In their first contact, her gaze travels from the bottom of his crutch all the way up to his eyes; it is the crutch she sees first. Later, Ma Li curves into the crutch that Zhai Xiaowei uses to balance his weight, given that he is working off of one leg. He supports her with both arms around her waist, as her one remaining arm wraps around his neck.

You might be glad you clicked on the five-minute video of She Without Arm, He Without Leg (and then come on back!). Ma Li and Zhai Xiaowei’s technique is virtuosic, a jaw-dropping display of the extended capabilities of bodies that had to create workarounds. The refined beauty of their choreography often derives both from the shapes the bodies make in space and the power to inspire of these two athletes–he a former Special Olympics cyclist, she a ballerina–who overcame their grief over lost movement options to invent others.

Perhaps the most stirring effect stems from the dancers’ presentation of expanded possibilities for partnering. Ordinary partnering allows dancers to become taller (as one dancer lifts another), to do spins in quantity (as one dancer supports the waist or hand of the other), or to achieve positions that take an interplay between two bodies for balance. Yet in She Without Arm, He Without Leg, the partnering takes on a heartbreakingly tender quality as each dancer compensates for the limited movement range of the other.

Just as the extraordinary able-bodied athletes we watch compete in the Winter Olympics in Vancouver this month expand our notions of the bodily possible, the adaptations those with disabilities create point the way toward the unconceived-of potentials of the body–possibilities we can’t even conceive of until ingenuity and necessity show them to us.

Over the past couple of decades, dance companies have developed choreography for dancers with paraplegia, cerebral palsy, and other disabilities, partnering them with each other or with able-bodied dancers. In one such dance, two men partner each other, the one without legs spinning around and horning around and under his able-bodied partner.

As a member of the Heidi Latsky Dance Company producing The Gimp Project explains, people want to look at people with disabilities, despite a certain shame in doing so. TGP’s producer, Jeremy Alliger, says that this form of dance alters spectators’ very notions of what constitutes dance and dancing–and who gets to be considered a dancer. So does the explicit emphasis of this dance on the sexuality and sensuality of those with disabilities.

In his award-winning Waking: A Memoir of Trauma and Transcendence, Matthew Sanford, who has been paraplegic since the age of 13, traces his development as a yogi and teacher of those with disabilities into greater body-mind awareness. Through the change in his circumstances Sanford came to recognize that those with apparent disabilities are not a specialized population different in kind from so-called normals: “We all live on a continuum of abilities and disabilities,” he says. “As a paraplegic, I can no longer rely on the normal course of my daily life to ensure a healthy connection between my mind and my body. The same is true for all of us.”

As he rehabilitated his body without the ability to move his legs, Sanford learned to use his arms in “double time.” His path eventually took him to the practice of hatha yoga. He has evolved into a remarkable teacher of yoga students, especially those with disabilities–able to talk them, in the detailed style characteristic of the hatha yoga style, through the sensations that he cannot feel physically, but nevertheless experiences at an energetic level. For Sanford, working with disabled yoga students has shown him that the “principles of yoga are nondiscriminating–they can travel through any body.”

If “difference” is the source of the particular way one moves, how might the motion of a depressed body look, or display to the gaze and being of an onlooker? How does the gait of someone with sciatic pain or irrepressible physical energy appear, and what does it convey or share to those who are in nearby bodies?

As we watch and experience with another–even one whose bodily capabilities and expressions we find foreign–we may feel a kinesthetic empathy, a movement in our bodies that seems to correspond to the energetic effort and experience of others. It may be what we feel watching the ballet of the woman with one arm and the man with one leg, or it could be what Matthew Sanford “feels” when coaching a yoga student who has the use of his legs.

That kinesthetic empathy is the surge in us as we watch a parent run to pull a straying child out of the street, the tightness in our own chests as we watch an elderly neighbor make the effort to shovel heavy snow. It is body to body, and is perhaps compassion’s essence–one person’s being mirroring, even within, what he perceives the other’s experience to be.

Perhaps more difficult than to experience the pain or bodily limitation of another is to fully experience one’s own. But could this be a root of compassion? As Sanford pungently comments about the power of facing one’s own bodily limitation, “I have never seen anyone truly become more aware of his or her body without also becoming more compassionate.”

I’m curious: what have you seen or experienced in the Special Olympics?